Calling all those with Bieber-fever! 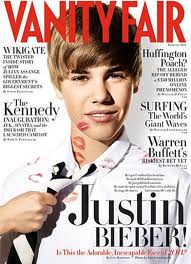 Looks like the success of your teen-boy wonder doesn’t necessarily translate into magazine sales. Though Justin Bieber continues to sell out music venues and branded memorabilia, Vanity Fair’s most recent sales report has Justin Bieber’s February cover issue on track to become the worst-selling issue in 12 years.

Why are we surprised? Well, we’re not. We can’t imagine that there are a bunch of 10-year old girls running out to newsstands across the country to buy Vanity Fair. Which raises an interesting PR point.

As media relations specialists, we regularly contend with determining the best outlets to target with our clients’ stories. We have to weed through the numerous options – top-tier media, trade, verticals, broadcast, digital, print, etc. — thinking about readership, viewership, story fit, searchability and optimization (among other things) before even formulating a pitch.

It goes without saying that Bieber is a cultural phenomenon, so we understand Vanity Fair’s appeal in his name. And some of the magazine’s most successful covers have included other superstars like Beyonce, Johnny Depp, Angelina Jolie and Madonna. But we have a hunch that you’re more interested in their stories than hanging on every word, tweet, video clip and reported sighting in the Biebersphere…

So when it comes to successfully getting your story out there, it’s important to think about who is going to see it, read it and be interested in what you have to say. If you don’t already know where your target audience gets its news – find out fast. Then take the time to ask how your story will be relevant to them.

If one PR lesson can be learned from this Vanity Fair news, it is that you have to know your audience so you can speak to them in their own language via communication channels they interact with naturally…Oh, and if you have a boy wonder story, save it for those outlets whose income relies on the purchase power of teenagers.