← Is Amazon’s Fire Phone a ‘Category Killer?’
Detroit in One Word: Indomitable. →

The Grand Audi was bustling and filled to capacity on Tuesday following a morning of big-ticket presentations from Google’s Chief Business Officer, Nikesh Arora and Yahoo’s Marissa Mayer.

A burst of press followed the last-minute addition of Kanye West to the bill. He was joined on stage by Translation CEO and Founder Steve Stoute, Andreessen Horowitz Co-founder and Partner Ben Horowitz, and moderator Stephanie Ruhle of Bloomberg. The session, Technology, Culture, and Consumer Adoption: Learning to Read the Cultural Landscape, started a little after 1 p.m., with lots of curiosity around how this soup would mix. 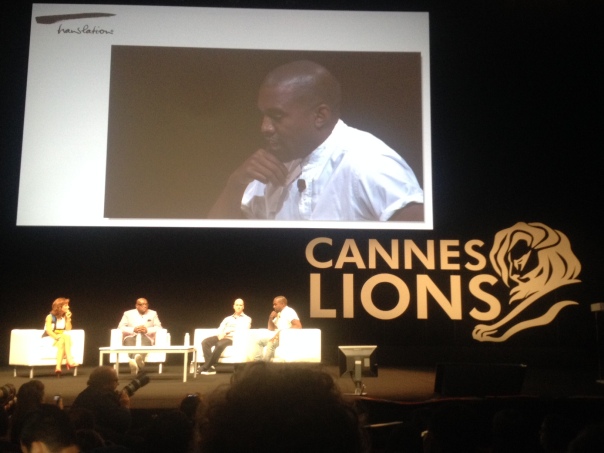 The connection between West and Stoute is obvious, but there was definite interest around how high-tech entrepreneur and venture capitalist Horowitz would fit into the discussion with two people very comfortable being center stage. The answer? Beautifully well.

West, Stoute and Horowitz were a formidable trio of experts on the intersection of music, advertising and technology.

Apple was central to the discussion, which ranged from the late Steve Jobs (and West’s own comparison of himself to Jobs) and the iPod era, to Apple’s recent acquisition of Dr. Dre and Jimmy Iovine’s Beats. Stoute, West and Horowitz all agreed that the acquisition was a smart move to help Apple regain some relevance and “coolness.”  Horowitz went as far as defining the $3B deal as 30 days of cash flow and saying that anyone who thought the price was too high was underestimating the potential for Apple.

West added, “I’m not a big fan of Samsung” (Jay-Z is a Samsung endorser) to which Stoute bellowed “There goes the neighborhood!” This was but one of the displays of humorous on-stage banter that made the session so entertaining.

On a human-interest note, here are some comments from West (because let’s be honest, we all want to know what he has to say at a festival like Cannes Lions):

All-in, it was a rewarding session whether attendees came looking for Stoute-like insights on how to market using culture, Kimye gossip or wise words from Horowitz.

← Is Amazon’s Fire Phone a ‘Category Killer?’
Detroit in One Word: Indomitable. →