The Cannes Lions International Festival of Creativity — the ad world’s largest trade show and awards event — began on Sunday, June 16, with nearly 12,000 advertising, media, marketing and tech executives in town until next weekend..

Now in its 60th year, the Festival’s first day of programming featured seminars about the explosion of digital and social content.

First up was a Daily Mail Online-curated panel with Martha Stewart, Nick Canon and the Spice Girls’ Mel B, that tackled the instantaneous nature of digital media, the proliferation of social media, and how these celebrities are using the media to manage their own brands. Stewart equated social media with “the wild west,” and said she “can’t be political” when using her various social channels, as it has the potential to alienate subscribes and key partners of her magazine and TV franchises.

Canon, who has 4.3 million Twitter followers, said that social media enables him to communicate directly with his fans, squeezing out traditional media outlets, which previously owned the main channel for connecting celebrities with fans.

All three panelists agreed “authenticity” was a key to successful social media engagement for celebs, something we strive to instill in our C-suite clients when coaching them on social-media best practices. It’s one thing to share your news and use the medium for self or company promotion, but the message is much better received when it comes from a place of truth and shares a real (and ideally provocative) point of view.

Next up was Gloria Steinem, a journalist and early leader of the women’s movement, who took lead in an AOL seminar tied to the brand’s digital documentary film series “MAKERS: The Women Who Make America,” which features real-life stories of groundbreaking females. The conversation, moderated by award-winning journalist Marianne Pearl, centered on the history of the women’s movement in the U.S. over the last half century, where it stands today, and what it will look like in the future.

The panel also featured MAKERS Executive Producer Dyllan McGee, and SVP of AOL’s Lifestyle Brands, Maureen Sullivan, to round out the conversation from a branded-content perspective. The two women discussed how “snackable” digital content like MAKERS is helping inform today’s generation about important history events in a scalable way.

Amid the fragmentation of the media landscape in recent years, it was exciting to hear about successful uses of digital and social content by brands –both personal and corporate. Now, if only Gloria Steinem could help get more females on industry award juries, the world really would be a better place!

MediaPost’s Editor at Large Barbara Lippert shares her thoughts on how this year’s Cannes International Festival of Creativity has evolved. Barbara describes how she has witnessed this festival transform from a small scale creative gathering into the “world’s fair for advertising”, aggregating clients, media people, and digerati from all over the globe.

Congrats to all this year’s winners at the Cannes Lions Festival of Creativity!

New for 2012 is the mobile category in which DGC client Goodby, Silverstein & Partners won a gold for the Chevy Game Time app.  More details on the work can be found here.

In the following video, Todd Grantham, managing director of GSP Detroit, discusses the importance of mobile marketing when trying to connect with a young audience.

Cannes is also excellent inspiration for people working with global brands, for people from all over the world walk up and down La Croisette throughout the week.  With so many languages spoken here, one is easily reminded how big the world is, yet so small at the same time.

One such global operation is Commonwealth, created by GSP and McCann Erickson Worldwide to serve the Chevy brand internationally.   As Adweek reported in March: “GS&P has been since 2010 the lead creative agency on Chevrolet in the U.S.—the brand’s largest market— and is behind the “Chevy Runs Deep” strategy. McCann Worldwide has overseen the brand in many global markets including Mexico, Canada, Brazil, India, Japan, China and Latin America (Brazil and China are just behind the U.S. as Chevy’s largest markets).”

The best work at Cannes celebrates human truths and connects with people in a meaningful way, says Todd, and that’s what the Commonwealth team is trying to do for Chevy.  Likewise, the festival provides the opportunity to get together with the broader Commonwealth team so they can plot their course. For more about Cannes and Commonwealth, listen to Todd here:

Shane Ginsberg, SVP of corporate development at Organic, said this year mobile came into its own as a category and as an advertising and experience platform. It will be increasingly important.

Ginsberg also said he enjoys the serendipity of the Cannes Festival of Creativity, getting to meet and work with new people from all over the world. Being surrounded by so much creative work is a source of constant stimulation, he said, and he was looking forward to the Organic Story Slam in which people would speak extemporaneously about their worst day in advertising.

The Pause that ‘Freshes’

Sara Arnell, CEO of Omnicom’s Arnell Group, explains the concept of “freshing” as it applies to brands. She says the approach is much less risky than a complete brand overhaul: “It’s about taking baby steps forward, following your marketplace, following your audience and trying new things.”

Cannes Lions Day 3: Round Up

Organic’s CEO Marita Scarfi talked to The Drum about Twitter’s entry fees for Cannes, saying that the 14 million pounds spent is “a lot more than most European digital budgets”… In another Drum article, Organic’s head of strategy, Steve Kerho, talked about how many tweets it took to sell a case of Healthy Choice frozen TV dinners… Congratulations to McCann Erickson in South Asia for its Gold Lion in the Outdoor category. The shop won for its work on behalf of Western Union… A Silver Lion went to McCann Erickson Romania for its “Romanians Are Smart” campaign in the low-budget category. The campaign has also picked up awards from the IAB Mixx Awards, Effie Awards and BestAds… J&J’ Kim Kadlec gave a presentation in which she likened the ad landscape to  “a digital tower of Babel”…  WPP Group chose the Cannes Lions Festival of Creativity as the place to announce its acquisition of digital shop AKQA, which wants a larger global footprint…

Good Things Come to Those Who Create

This post is a report from DGC’s Claire Eisenberg, who is blogging from the Cannes Lions Festival.

We regularly look to the past as the heyday of creativity in advertising — nostalgic campaigns of the 60’s, the Mad Men craze — but in a keynote in Cannes by Kim Kadlec, Worldwide VP of Johnson & Johnson’s Global Marketing Group, she challenged us to see that the golden age of advertising has evolved to the platinum age, which is NOW. Heck, people’s pets and plants are tweeting when they’re thirsty and glass tablets that start cars are just around the corner.

Now, then it’s time to reconsider the 1960’s and the marketing mix we all remember from Marketing 101: Price. Promotion. Place. Product. Kadlec proposed a new set of the four P’s in today’s platinum age of advertising: 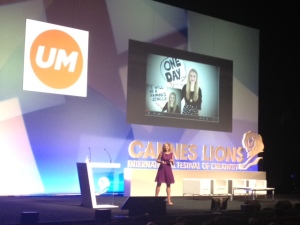 She noted that global, connected consumers are very savvy about authenticity. They want style—and substance. A few examples she cited of purposeful brands:

Marketers need to be where consumers live. And they need to get persona—build relationships. In the age of self-promotion, nearly everyone has an Internet presence. That’s an opportunity for marketers to engage with relevance. Examples Kadlec noted:

New technology, new apps and near-field communications enable marketers and media outlets to be in “place” with consumers 24-7, Kadlec said.

There has never been a better time for big companies to innovate and stand out from the crowd—as a team, Kadlec noted, adding that there is strength in numbers. Here are a few key partnerships she mentioned that are under way:

These examples make clear that we’re experiencing an exciting time of innovation and creativity in advertising that will be remembered for decades, Kadlec said. Technology, data and consumers’ passion to collaborate make it possible for savvy marketers and media companies to create content that drives sales and brand engagement. So from Kadlec to all marketers: Become a marketer of NOW! Go bold or go home. Innovation doesn’t come from what you know, but outside of what’s expected.

Cannes Lions Day 2: Round Up

DiGennaro’s Erin Donahue interviews Jeff Goodby in Cannes about his Chevy client’s launch of the Sonic. “It is a vehicle for young people [who] should still be doing crazy things,” said Goodby, who is co-chairman and creative director of San Francisco-based Goodby Silverstein & Partners. Chevy has a Sonic event scheduled in Cannes on the lawn of the Grand Hotel featuring creative minds behind the Sonic exhibit on Wednesday, June 20, at 5:30 p.m. south-of-France time… Adweek also has a video interview with Jeff Goodby that touches on his relationship with GM CMO Joel Ewanick… Nancy Hill, President-CEO of the 4A’s, also sat down with Adweek to discuss why she makes the annual trip to the Festival of Creativity. Speaking about all the creative work on display, Hill said, “When you realize what we do as an industry, it’s just so amazing to see it all in one place.” When asked that digital technology she can’t live without, Nancy, who spends lots of time on airplanes, cited the Flight Tracker app… Kim Kadlec of J&J spoke at Cannes and linked the space race of the 1960’s to advertising’s golden era of the same decade, but then declared that we are currently experiencing advertising’s “platinum age of creativity.” She also defined a new set of the four “p’s” for marketing: Purpose, presence, proximity and partnership…  WPP’s Blast Radius won a Bronze Cannes Lion in the mobile category for its Air Jordan 2012 campaign http://vimeo.com/44005174…  Coca-Cola is joining “the mob,” according to Adweek.com. The Atlanta-based soft-drink giant is in Cannes, and its CMO, Joe Tripodi, talked about how the company is connecting with consumers through the latter’s relentless sharing of content through a plethora of media channels all over the world… The Effies Index at Cannes showed that McDonald’s was the most effective brand, while WPP Group was the most effective advertising holding company… Facebook’s Paul Adams was at the Festival of Creativity a “map of humanity” illustrating how all people are connected…

Judges awarded a Grand Prix in PR on Monday to the Puerto Rico office of JWT for its Banco Popular campaign in which a band called El Gran Combo re-recorded its hit, “No Hago Màs Nàs,” (“I Do Nothing”).The new version of the song has slightly different lyrics about the virtues of hard work…Caine Monroy, who built Caine’s Arcade, was the youngest speaker ever to appear at the Cannes Lions Festival of Creativity.  He gave his thoughts at the JWT-sponsored talk, “What Can 3 Kids Teach You About Creativity?” Caine was joined by 12-year-old Jordan Casey, one of the world’s youngest app developers…Executives from Visa and its long-time agency TBWA\Chiat\Day gave some insights about the credit-card company’s “Go World” campaign for the Olympics. Narrated by Morgan Freeman, the campaign gives a glimpse of the “back stories” of Olympians past and recent—including Lopez Lomong and the 1970’s gymnast Nadia Comaneci…IPG’s Mediabrands has a villa in Cannes and on Monday held a panel called “Making Brands Matter.” The Huffington Post’s Arianna Huffington announced that in August the publication will launch a live video streaming site that will include coverage of the U.S. political conventions.

Posted in Cannes, Cannes Lions, DiGennaro Communications, The Hit Board