Talking the Talk: How to Speak PR in the UK 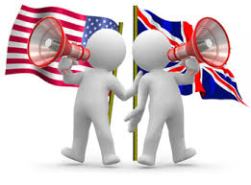 Ever chased a journalist? How many sell ins have you done this week? Chances are, the answers are yes and many, but that’s not how you would say it. A “sell in” is a pitch, and to “chase” means to follow up. While the general approaches and goals of PR are the same on both sides of the pond, the terminology is quite different. When scheduling a “sit down” (meeting) with someone, be sure to check your “diary” (calendar) first. What we call “hits” or “clips” are the more formal “pieces of coverage” in the Queen’s English, and a byline is known as a “comment piece.” A company’s revenue is referred to as “turnover” and where we’d call financials simply “numbers,” here they are “figures.” Though these phrases aren’t what I’m used to hearing, they’re all pretty logical terms (unlike when I learned that a “plaster” is actually a Band-Aid…) and it’s helpful to be able to talk to the talk across various countries—even other English speaking ones!

Beyond the vocab, there are a few other differences when it comes to PR and media relations in the UK and the US. England has a large variety of national papers (approximately 13) where the US of A has mainly regional papers, with a few national exceptions that are particularly competitive. It’s more of result of geography than anything else: compared to the UK, the United States is absolutely massive and there aren’t many national outlets, but there are loads of regional ones. To put it in perspective, the entire UK (including all of Great Britain and Northern Ireland) is roughly the size of the state of Oregon. The number of outlets aside, there is also some variation in what the media is interested in. There aren’t as many talk shows in Britain as there are in the US, and they are less likely to cover something purely consumer-facing with no strong news angle. While a hard news hook helps with securing coverage no matter where you are, it’s even more important to get in with the UK media. For this reason, surveys and research are used regularly—with some clients as often as 2 or 3 times a week.

Of course, everyone at Eulogy! has been very helpful in explaining all this to me and has been kind enough to not laugh directly at me when I ask what a particular word means. For the record, “jelly” refers to jell-o, a “biscuit” is actually a cookie, “chips” in the UK are French fries, and I still can’t figure out why Band-Aids are “plasters.”

Posted in The Hit Board